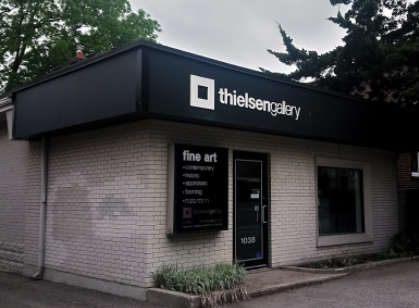 As a certain imported virus has been poking a stick in the spokes of societies all around the world for more than a year now, not the least of the deprivations we have suffered is the way in which commemorations of all kinds became well nigh impossible. Funerals and weddings, anniversaries and birthdays and parties of every kind have either been overlooked altogether, postponed until a more propitious time or have quietly gone ahead but in drastically scaled-back form.

In July a lot of Londoners were shocked to read a Free Press article by Joe Belanger announcing that after a seventy-year run, the Thielsen Gallery on Adelaide Street North – the first privately run gallery in London to regard art as something more than a component in home decorating schemes (“Can I show you something in a sofa-sized seascape?”) – had been bought by a young artist named Greg Benns. While it was gratifying to learn that the newly dubbed Benz Gallery will continue to showcase art and will maintain the same focus on abstract work which was a Thielsen hallmark, it would’ve been nice to have the opportunity of paying the much loved Thielsen Gallery one last visit before it passed into history. Perhaps this essay will help to make up for that missed opportunity.

During this time of lockdowns and restricted service when we morbidly wonder whether certain businesses will be able to hang in until things open up again, I was relieved when Jens Thielsen assured me that his family’s gallery was not a Covid casualty.

“No, it wasn’t that at all,” Jens said. “That was totally coincidental. I needed to semi-retire. I’m in my late 60s so I think age as much as anything was a factor. It was time to slow down and enjoy a few other things. But everything was in play before Covid hit. We had a restorer, Margaret, and a framer, Mike, who had both retired. And my assistant Mary had retired a year or two prior to that. We were all sort of retiring which made it a natural end to things. My daughter used to work for us but she has five children and that’s a full time job so it wasn’t really feasible for her to come back and run the business.

“My wife, Barb, and I were actually in Palm Springs when Covid really developed and we had to come back to Canada nine days early. Then we had to isolate and in three weeks we had to have the building emptied so it was all a little more rushed than I had anticipated. It was May 1st that I closed the actual gallery because we had sold the building. It was extremely difficult and very emotional to sell that building because I’ve been there almost all my life.”

A notable indicator of the rare esteem in which the Thielsen Gallery was held is that some of its highest praise comes from two of its ostensible competitors. Al Stewart who runs both the Art Exchange and the Westland Gallery in the heart of the Wortley Village said he always regarded the Thielsen operation as “the blue chip gallery of the city. Jens’ dad started it and he had a great eye for work and got to know the senior artists. He got the cream of the crop of local artists like Eric Atkinson and Tony Urquhart as well as national figures like Alex Cameron and the Group of Seven and Painters Eleven. And Jens and his father did all of this in a time before there was any social media. I could never figure out how the hell they did it. Jens may not have carried the work of all of the national artists but he knew where to find it. If someone was looking for something or someone owned something and wanted to move it, Jens was the dealer they’d approach. I’ve always worked with local artists. I aspire to do that. Jens has had to put up with a lot more divas. I work with friends, nice people.”

I told Al about my introduction to the Thielsen Gallery in the 1980s when I was going somewhere with art collector and critic Ross Woodman and he insisted on dropping in to the Gallery for a quick whip through. I was mystified at how they could make a go of it out there on Adelaide Street North. Weren’t art galleries supposed to be downtown?

I ran that same question past Nancy Poole who used to run her own galleries in London and Toronto before managing the London Regional Art & Historical Museums (as it was then called) in the ‘90s.

“What he had,” Nancy said, “was great parking at the rear,” which set me off on a laughing jag because it not only sounded hopelessly simplistic; it also sounded like the truth. “For an art gallery there is no such thing as local foot traffic,” she added. “It wouldn’t have mattered where he was.”

Indeed. I couldn’t help thinking of all the downtown merchants I know who are lamenting their vulnerability to a new kind of unhinged and over-medicated foot traffic that makes shopping in the core such an ordeal right now. But of course Thielsen Gallery had a lot more going for it than convenient parking. Nancy also commended the layout of the place and the multiplicity of services they supplied which included exhibitions, art appraisals, restoration work and framing,

“I handled London artists primarily,” Nancy said. “Thielsen had a much wider range of artists. In 1969 I began, from time to time, to confer with the Thielsen gallery promoting London artists. It was always a pleasure to speak with either Jens or his father who were very knowledgeable about both London and Canadian artists. I learned that I could depend on the accuracy of their information. In those days, trust and a handshake were all that was required doing business with the Thielsens.”

Jens’ father, Svend, was in the gallery business in Copenhagen, Denmark after the war and before settling in London, he travelled all over North America before deciding to ply his trade in London Ontario, perhaps because there didn’t seem to be much else going on here in his chosen field. He set up his first gallery in a shop on Dundas Street at Egerton across the street from the fairgrounds.

“It was a relatively inexpensive building that they could create a gallery out of,” Jens recalls. “I don’t think there was a lot of money in the gallery business back then. Tony Urquhart had his first show with us there sometime in 1957 I think it was.”

Early in the 1960s the move was made to Adelaide Street. “My father and mother bought the building because it already had a little gallery in it,” Jens explains. “And as it turned out – we kept renovating and upgrading it and expanding a bit here and there – it’s worked really well for us over the years.”

There were some big changes regarding how business was conducted over the forty years that Jens himself was in charge of the family operation; a lot of it having to do with the arrival of the internet which has impacted just about every line of work there is. Coincidental with that innovation in the ‘90s was a real surge in collectors and dealers who were treating art as an investment.

For artists who exhibited work at the Thielsen Gallery, the working arrangement was always straightforward. “I handled them on consignment,” he says. “Most galleries do what that. My father didn’t bother with written contracts and I didn’t either. We had agreements and as long as we shook on it, that was it. If it had been problematic, we would’ve started doing written contracts but it worked well for us and we never changed that format over seventy years.”

I asked Jens if he ever felt the need at any point in his career for some sort of formal training. “I have had some but really from the standpoint of everything I know, it is entirely based on being in the business for a long time and starting out working with and learning from my father. I really learned it all that way, as far as appraising and art dealing, and learning on the job for all those years. My father was extremely knowledgeable.”

While Jens sold the Adelaide Street building this year and no longer provides framing or restoration services, he did not sell off his business altogether and continues to work out of his home as an art dealer and appraiser.

“I didn’t have anyone to take over the business,” he explains, “and I didn’t want to sell it. I still operate the business. As it turns out I’m quite happy the way I am now. It’s certainly a much more flexible scenario now and I like that. As much as there are upsides to running a retail business of any kind, there’s certainly some downsides. Now I do everything out of my home office which is only art appraising and a little bit of wheeling and dealing in art because I own quite a bit and I wasn’t quite ready to hang up my shingle entirely. So the only thing I don’t have is the physical gallery.”

And he still does a lot of work as a much-in-demand appraiser working with public, corporate and private collectors and for applications that are made by artists and galleries to the Canadian Cultural Property and Export Review Board.

Jens was way too diplomatic to tell me who his favourite artist was to work with or who his favourite customer was. “I have wonderful memories of dealing with so many great artists; excellent, top notch artists. I’ve had great relationships with them that went on for many years. Lots of really positive memories. And I wouldn’t name a favourite customer because we have so many. It’s like artists. I’ve sold so many wonderful paintings. I’ve really enjoyed all those years of collecting for ourselves and putting a customer together with just the right work of art.”

Herman Goodden is a local writer and has his own blog, Hermeneutics, where you can read his weekly articles:  www.hermangoodden.ca