It is a simple thought but one that in some ways is deeply unsettling: the world in which we live, the taken-for-granted world we have constructed around us, originated from a nothingness, a void. Aidan Urquhart’s exhibition at the St. Thomas-Elgin Public Art Centre (July 1- 30, 2016), entitled New Canadian Cabins, brought that thought to mind while exploring the origin of the idea for his current exhibition. 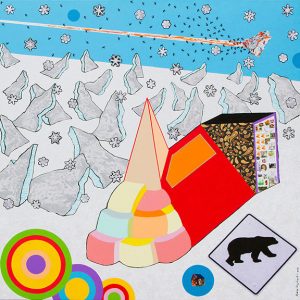 It started with a dot, a small circle on a sheet of white bleakness — that dot being an image of a wooden ice fishing hut covered in patterned pieces of cloth like a patch-work quilt placed against the desolate, snow-covered shore of Lake Nipissing — the result of a submission to the KPW Kennedy Gallery for its 2010 Ice Follies Competition.

Six years later, that far-away, miniscule dot has exploded into an exhibition of twelve, 4′ x 4′ acrylic paintings/collage works, and two large geometric floor pieces. The exhibition in its entirety is bright and appealing in its wide use of warm yellows and reds, vibrant circles and patterns, and sporadic images of Canadiana (patch-work quilts, nationalistic decals, a beaver, icebergs, Canadian beer). The paintings as well as the floor pieces hold together well in their solid compositions and finished application of paint and collage.

However, with a closer look beneath the surface of what we see, a thought-provoking message is presented. In the fragmented compositions of brought-together, disparate objects, the work speaks of an underlying tension in an attempt to hold to, or reclaim, a sense of nationhood, a sense of self and home. 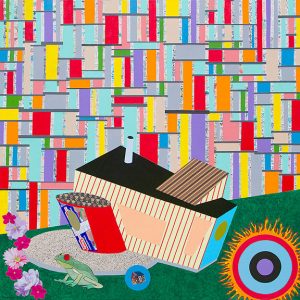 The focus of each piece is on structure with a central image being some form of abode, a place for human habitation that one might find within the Canadian landscape: an igloo, a small bungalow, a prefab trailer home, a summertime cabin at the beach, a fishing hut. But each abode also suggests something else. For example, in New Canadian Cabin Series (NCCS) #3 the central structure looks like a storage unit stuck on a rural mail box. In NCCS #6 the abode form suggests a manual slot machine, or a traditional child’s toy. In NCCS #9 an igloo shape becomes a triangular cone shape. As art, these three-dimensional forms become part of an abstract landscape with flattened areas of colour and patterns. And notably, none of the structures allows a way in — doors are without handles, windows sealed shut, entrances are blocked or hidden. They appear as removed, inaccessible conceptual abstractions rather than human dwellings.

Close to that of abodes, another significant theme runs throughout the work — that of domesticity and a sense of home. Pillow cases and dish towels hang over openings in the floor structures. In the wall paintings, a warm yellow light shines through windows; a domestic cat sits waiting for attention; flooring and wallpaper patterns are visible in a number of the wall pieces, as are images of various suggestions of toy-like structures — all suggestions of home life. But all these images are objectified and presented here in disconnected and disorienting ways. As if floating in space, the objects become blended and flattened in compositions of patterns and shapes. One image signals the tension in attempting to reclaim a traditional, unified notion of home — the hanging dish cloths with a big black X carefully painted on them.

This exhibition is a personal narrative of Aidan Urquhart’s growing up and living in Southwestern Ontario, in a time of shifts and changes and global uncertainty – we are reminded of the temporality and fragility of our existence 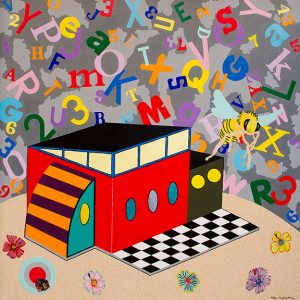 Also throughout the art is the theme of reclaiming a sense of self with fragmented references to innocence and childhood. The bright colours, the large numbers and letters, the various-sized coloured circles come from the world of the child. In at least two of the works the artist collaborates with his child self. In GCCS #15 in the bottom right corner is a photocopied and pasted on cut-out and coloured-in drawing of a ’53 Cadillac done when the artist was thirteen. In the background of GCCS #8 almost lost in the boldly coloured rectangular shapes are a number of collaged-in small detailed comic strip motion picture scrolls done by the artist when he was seven years old.

Against backgrounds and foregrounds of fragmentation, there is also an attempt to create a sense of stability in the form of an obsessive application of patterns and solid colour. Innumerable paper dots from a hole puncher are individually pasted on in the northern landscape piece, 3 000 staples stick fabric to the wooden structure of the ice hut, reclaimed stamps are meticulously glued in place, innumerable cut-outs are perfectly cut to the line, and attention is given to collecting, ordering, and numbering, including the reclaimed ledger pages of a Bud Gowan business, salvaged from a garbage bin.

What at first seems dazzling and inviting, but somewhat disorienting, now appears full of tension and uncertainty. Although the works all relate to human habitation, no human presence is visible, anywhere. Instead the works are more about abstraction — a series of isolated and vacant spaces, disconnected and floating. In an attempt to pull together what has come apart, we are left to accept what is at present.

Although this exhibition is a personal narrative of Aidan Urquhart’s growing up and living in Southwestern Ontario, in a time of shifts and changes and global uncertainty, the message is universal and we are reminded of the temporality and fragility of our existence. One image within the work speaks terrifyingly to the underlying themes of Urquhart’s work: in NCCS #6 a fiery meteorite is shooting across the northern sky angled toward planet earth, with black angels streaming out of it. This image is rather subtle, and almost comic, belying what it represents.