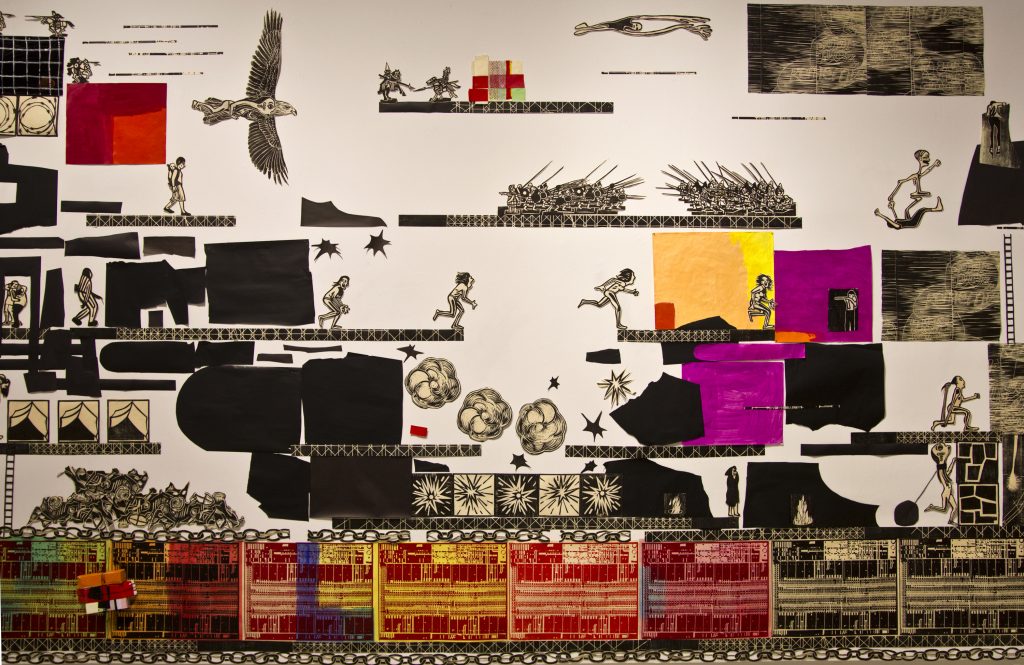 An apt approximation for conveying the feel of Libby Hague’s latest installation, Every Heart Can Grow Bigger, can be found in a quick skim of the chapter titles in author David Wallace-Wells’ The Uninhabitable Earth: Life After Warming: “Heat Death;” “Hunger;” “Disasters No Longer Natural;” “Unbreathable Air;” “Plagues of Warming.” Such are the choose-your-own-adventure style options on display alongside swimming, surfing, and dancing. Fusing the playful with the tragic, blending a “kindergarten feel” (as critic Leah Sandals put it) with a characteristic fixation on disaster and precarity, Hague’s thumbtacked cut-outs, string-and-wire menageries dissolve like cotton candy, taking the gallery walls with them, under the viewer’s gaze. One is left in a centre of gravity that extends beyond this or that tradition of representation.

Entering the space at Gallery Stratford felt reminiscent, in retrospect, of stepping into a record shop where album covers, pressed vinyl and posters climb the entire height of the walls. Taking several steps down from the main level, my eyes were drawn up and across multiple tiers of visual “stuffs:” a brazenly transmedial montage of reproductions, cut-outs, torn or trimmed paper and plastic wrap – a grab-bag of style, genre and iconography pointing to nearly every period of human history. In this sense, the square room comes off as a collector’s den, rewarding the viewer in proportion to the amount of time spent perusing its play of documentation and popular history. Its size and the visual continuity across all four walls later brought my mind back to the frescoes of small chapels and places like the ancient Villa of the Mysteries, found buried under the remains of Mount Vesuvius. One naturally thinks about the larger historical perspective on our own current moment, and what traces we are leaving for the future.

As I gave my attention over to the flow of details, which included Christian motifs and Hieronymous Bosch-like distortions of the non-human animal (and human-animal hybrid), I began to search for the narratives they surely dramatized. But I didn’t get beyond the sense of a stratigraphy of sedimented layers, something like a proto-grid, with its series of strong horizontal and vertical lines. A horizontally repeating print runs around the bottom of each of the four walls, itself echoed vertically in a series of between six and eight similarly spaced tiers or levels. One has the overall impression of looking, perhaps, at the cross-section of a building, the legers of a musical staff, or a “wall-scaled graphic novel”/ “storyboard-type” installation (as Diana Sherlock has said of Hague’s other work). To this I would add the various levels in a scrolling platform video game. Indeed, history is filtered through the forms of 20th century mediation: circuit boards; spools and reels of magnetic tape; cartoons; newsprint; electrostatic interference; explosions; the coin-operated game arcade.

Intrigued, I attempted to thematize and give directionality to the walls. On the southernmost wall, the repeating printed circuit-board-style designs are arranged in the shape of a tree, invoking evolutionary and origin metaphors: the phylogenetic tree; the “Tree of Life,” the Cambrian explosion – panels covered in green at the top depict canopies of foliage, which descend into hues of yellow, orange and rustier reds along the bottom, representing a trunk and layers of biological history. One series of black and white figures draws on the conventions of depicting homo sapiens’ evolution from primates, only to reverse the sequence (man appears smallest, and is now hunched over, crawling on all fours). It is difficult to consider the breadth in biodiversity depicted here without also thinking of its fragility, the repeated losses to a series of mass extinctions, another of which we are told is now underway.

Large black cut-out shapes nailed to the upper right corner begin to tumble and cascade over onto the “Western” wall in the form of an immense, dark tidal wave (oil spill? apocalyptic flood?) that appears ready to wash out people attempting to save others from drowning. One man holds the body of a woman on her knees; her legs are depicted rippling like waves. Bodies posed in mid-air, silhouettes of skaters and neon backgrounds evoke the idea of the “wipe out” – in this case drawing connections to contemporary moral and existential crises. This theme of the fall (decline, collapse?) is reiterated on the wall opposite. The image which struck me the most here felt strangely prescient and on point – a man lying face down, as if fallen and drowned in water. I couldn’t help but see the image of the Salvadoran migrant and his two-year-old daughter who died earlier this year trying to swim across the Rio Grande.

At the back of a small hallway separating this from the “North” wall, a mesh of black plastic ribbon has been looped together in a manner suggesting some type of wire fencing barrier. This highlights another repeated motif – a heavy, unbroken chain running along the base of every wall. The theme recurs in barbed wire imagery throughout. It is as if these invocations of fences and chains (one figure tries to walk with a ball and chain attached to his neck) speak tragically of collective human potential turned against itself.

The north wall develops this idea with cut-outs depicting a battle scene and gunfights. Clouds of smoke and black and white star patterns connote the sounds of explosions, while survival motifs continue in the form of figures running to leap over a chasm in the centre of the wall where platforms have broken and open onto what is recognizable from video gameplay as a possible death trap. Near the bottom, post-apocalyptic fires burn in trash cans. As I continue to scan the wall, I imagine I hear its soundtrack of brute pops and incessant noise: glass breaking, heavy objects falling to the ground, and all the other effects that shape blockbuster chase and destruction scenes.

A few diverse elements stand somewhat apart from the rest of the imagery: a cut-out disco ball and a small paper surveillance camera, each high up on opposing walls, seem to speak to the increasing mediation of contemporary life, holding the viewer in the tension between the mirror and the camera. A set of painted woodblocks hanging from another wall reminded me of buoys or life-saving devices; they act as a three-dimensional counterpoint to the plastic chains, offering the vision of hope or redemption.

I took a close-up of a piece of construction paper nailed to the wall, merely to admire its simple juxtaposition of colour and texture. More fragile than stone, more material than digital video, “paper is very warm and human,” Hague has said. I linger on this insight and its connection with the history of human mark-making. Compared with sculpture and painting, now thought to extend back at least 35,400 years to the stencils in the Leang Timpuseng cave on Sulawesi, Indonesia – considerably earlier than phonetic and alphabetic writing systems – printmaking is still fairly “new,” as critic Ray Cronin has pointed out. As “new media,” its boundaries are porous; it can more easily translate between publics across media, space, and history.

When I consider myself surrounded by what begins to feel like a big data, random-access-memory allegory of human history, I empathize with these figures in the midst of running: away from threats, or just marathoners chasing PRs. All responding to the pressures of acceleration; an urgency for getting ahead, or simply not falling behind. The work strikes the survivalist chord of media translating life as a struggle to outlast whatever chance or adversity brings: books and films like The Maze Runner and The Hunger Games, but also the classic dice-rolling board play of Snakes and Ladders, first-person digital games like the escape-oriented Shift (Antony Lavelle, 2008+), and classics like Pitfall!, Montezuma’s Revenge, and Mountain King.

I found the installation followed me out of the gallery and into the days ahead, retrospectively telegraphing me its images and ideas, like birdsong, from the depths of its faux-naïf façade. One of the more poignant was an impression of that dream in which one catches oneself falling, or trying to run while not being able to move, or some superimposition of these. Much as Hague’s humans are bent on running as fast as they can, despite being fixed to the wall: the dream would seem to be a nonstarter, but the situation in which we find ourselves is real.

Wallace-Wells writes that “fifteen percent of all human experience throughout history, it’s been estimated, belongs to people alive right now.” This surge in population is “an explanation for why history seems to be proceeding so much faster, with so much more happening, everywhere, each year, even every day.” This, too, captures the feeling of the exhibition. An unidentifiable speaker asks, in all-caps, in a snippet of text fixed to one of the walls: “How did it get late so soon?” (Or, in other words, is there still time?)

The question could also be thought to come from one of the wistful figures depicted in a series of archival prints from Hague’s work in the late seventies, now greeting visitors in the lobby. Ghostly, and more fully fleshed-out, friends, couples, and neighbours share contemplative moments with the viewer, transmitting a sense of the slower temporality of what can seem like a more human period.

Hague’s archival/ archaeological display hints at the true scale of the risks facing humanity, but also of our hopes. By foregoing narrative structure and the coherence of perspective, this exhibit invites our recognition, while blocking identification and expectation. It helps us to respect a complexity that we cannot think, and to imagine a future on the basis of the dreams we share with all our relations, present and past.

All images courtesy of Gallery Stratford. 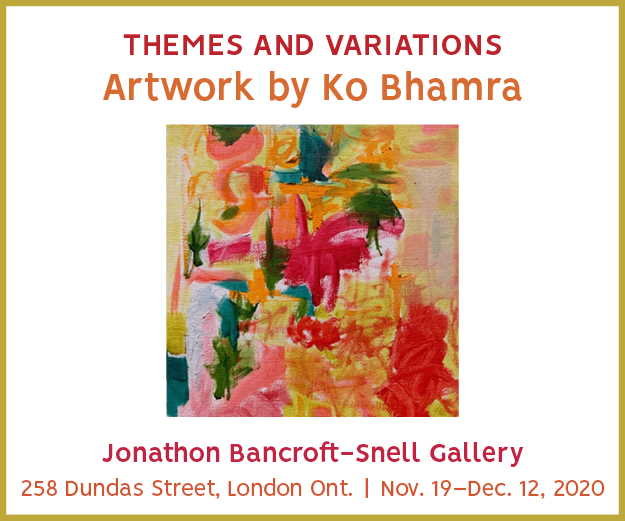