Iceland – in darkness for more than three months of the year, blanketed with snow for more than six, a landscape of wide open, empty spaces with a pervasive, deep silence that hangs in the air. The cloudy town of Akureyri is the northern-most city of Iceland, hidden in a Fjord surrounded by mountains with a population of around 20,000. From an environment that can seem so bleak and isolated comes the bedazzling, child-like energy of Icelandic artist Georg Óskar, whose exhibition of recent paintings, entitled, “Notes from the Underground,” is currently hanging at Central Studios in London, Ontario.

Óskar recently moved from Iceland to Berlin in a bid to increase his growing presence in the wider art world. And this current exhibition reflects the impact of this transition in ten large oil and acrylic paintings and six smaller oil pastels that are presented in a more playful and dashed-off fashion. In viewing these paintings we are witness to a fascinating visual dialogue as this unpretentious artist from an Icelandic backwater employs his considerable skills and characteristic humour in his depiction of the big, hard metropolis of Berlin.

This sense of a confrontation between naiveté and experience is perhaps most pronounced in the painting called Underground Man, a night scene where 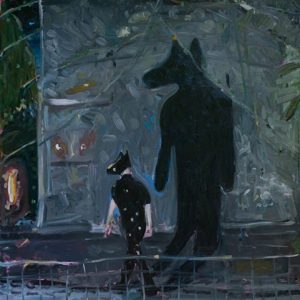 something dark and sinister seems to be happening. The painting was inspired by a quickly snapped digital image of a small group of darkly dressed people, one donning a leather horse head, who are striding along the busy Berlin street at night, possibly on their way to an underground fetish party. Óskar took the photo image and created a somewhat foreboding painting of a solitary man confidently marching through an underground passage on his way to a dimly lit nightclub, indicated by a few short orange and yellow strokes in the corner of the canvas. Behind the man is a high grey wall painted in frantic brush strokes on which is projected a long dark shadow of the dark figure. With this painting, as in the other works in this exhibition, Óskar presents a kind of “Peeping Tom” moment; situating himself between voyeurism, awareness of self, and a compulsive attraction to the dark side of city life.

Berlin parks are a particularly fertile source of inspiration for Óskar’s artistic imagination. In We Come Here Sometimes, two people are sitting on a park bench, profiled against a distant sunset on a gloomy dark evening. The two are 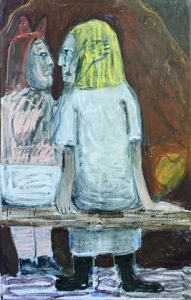 possibly lovers, but there is a suggestion of something sinister and secretive in their intimacy as they gropingly blend into each other. As with his other paintings, there is certain vagueness of representation in the images, deliberately leaving much open for interpretation. In this painting, the figures appear both male and female, a kind of unisex person, as Óskar depicts an aspect of human nature where both men and women “have longings that perhaps they shouldn’t have.” Such ambiguity is intentional and Oskar is pleased that the narratives in his paintings are not understood in a linear, or as he describes it, “spot on way”.

In another park scenario, Hi. My Name is Superman, an innocuous small boy dressed in a Superman

costume sits on the ground in an otherwise empty park. With one long, thick, red brushstroke for Superman’s cape, Óskar captures the deflated image of the child, as he timidly says “hi” to an indifferent cat – a stark contrast to the superhero who boldly announces he has come to save the world. In keeping with his themes of humour and self-awareness as an artist, Óskar makes this image the first thing that pops up when opening his curriculum vitae on his website.

In Date with Death, Óskar moves into a more painterly approach to his canvas with the thick, lush background of a dark, dense park forest which visually engulfs the less-than-romantic café scene in the foreground. Here, 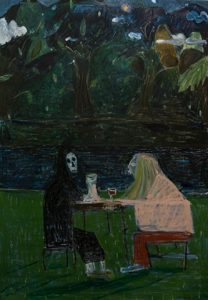 a couple are sitting at a table with a tall glass of red wine between them. They seem lost in conversation with one another; a rather frumpy silhouetted person sitting on one side, holding hands with a very dark hooded figure on the other. This viewer is thrown into an uneasy contemplation by Óskar’s comment on this painting: “We know that it is a date that we all will have.”

Not all Óskar’s paintings are set in parks. In the work Untitled Óskar comments on a current trend that the artist sees happening with modern-day artists like himself. It is the use of the obscene, the offensive and the highly provocative to grab attention for their work. Here, a dark masked figure is riding a small Icelandic pony as he snaps his whip 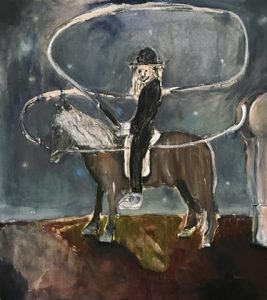 In Óskar’s most recent painting, Nobody Knows Where Man and His Thinking Are Going, he continues to unpretentiously move into more philosophical content. He has only recently begun reading works of philosophy and is delighted to find in such writings, words and ideas that resonate with him. In this loosely painted work. a truncated figure of a hooded man with dark eyes is posing against a spring-like setting. A kind of knight perhaps, dressed in medieval costume, is captured in a contemplative moment while holding an 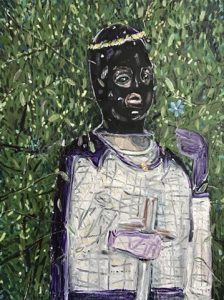 inspirational object before him – a small flower. He appears ready to pronounce a great insight on the meaning of life, but the seriousness of the moment is undercut by the ephemeral, even childlike immediacy of the application of paint to canvas.

An unmistakable and overarching element of all of Óskar’s work is his fiendish humour that turns up everywhere – from the end of the whip of the dark man on the horseback; to the cat (with a face like that drawn by a child) gnawing on what appears to be the human leg of a tourist in Safari; to a curriculum vitae that starts with the deflated image of the child superhero; to the titling of a work such as Mikki Matisse (Mickey Mouse figures dancing in place of Matisse’s nudes). Along with this humour is a certain beguiling innocence of mind in his exuberant approach to applying paint. It is this humour and innocence that lift his work up from the murkiness of his palette and the often poignantly dark subject matter and enable him to maintain a bemused distance from the profane, the dark, and the obscene. It is an approach that suggests that the true brilliance of his art lies not on the surface of his canvas but rather on the conceptualization behind it.

Listen to the audio clip of the interview with Georg where he talks about his painting “Date with Death”.