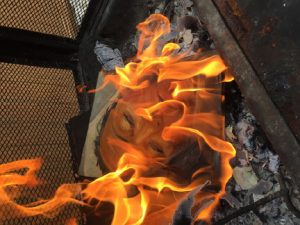 Laura Woermke’s art exhibition (August 27th – September 10th), on display at the studio of another well-known local artist, Gerald Pedros, offers a number of bold and dynamic statements that come together in the presentation of her work. In this exhibition, Woermke challenges the conventions associated with showing art in public museums and galleries. She also offers a way for artists to take control of their work and how it is valued and presented. And, in her artwork itself, she opens up how art is brought into being, where coincidence and suggestions by others are an integral part of the process.

The exhibition, which is called Paper Crown, is presented in two rather large rooms of Pedros’ studio. In one room is an installation which fills half of the space. Cut-out panels of paper on foam core are suspended from the ceiling or jut out from floor and walls. Each panel is a black and white line drawing relating to an overall theme of anguishing female figures shrouded in thick wavy hair. In the second room are neatly hung, evenly spaced posters pinned to the wall, approximately 28” X 36” in size, with each poster an image of a burning painted canvas featuring a female face fixed in an expression of despair.

In determining to show her work in Pedros’ studio, Woermke questions the position that art galleries and museums hold in defining what art is and how it is to be shown. Woermke sees these forums as artificial environments for showing art, and with their focus on maintenance and preservation, they limit the appreciation of art and what art is presented. Pedros’ studio, with its bared rafters, uneven concrete floor, and paint peeling from brick walls, offers a more real environment, and one which is more effective in conveying the message behind her art. Her work is closer to that of street artists where the viewer is left to make her/his own connection to the art.

In determining to show her work in a private studio, Woermke questions the position that art galleries and museums hold in defining what art is and how it is to be shown

With this exhibition Woermke suggests a way for artists to empower themselves in determining who sees their work and how it is viewed. By showing in Pedros’ studio, she presents the idea that artists can work together to have their work validated, and in effect move away from the role that curators of public galleries and museums play in determining what gets shown.

The images for Woermke’s installation piece draw upon her printmaking background and work with lino prints mainly. The large cut-out pieces are not prints but with the emphasis on black and white line drawing there is a strong print quality to the work. With each image created on thin paper, there is a certain feeling of fragility and transience to the art, which complements the theme of her installation – the barely visible stratum of women who have fallen victim to the dominant, but often subtly imposed, social structures that determine how women should be viewed. We see here bulimic women, emaciated women, women in despair, fallen woman, and women of varying ages and social status, all struggling with their self-image. In this work Woermke brings this tragic, mostly hidden phenomenon to the foreground in a real life environment. 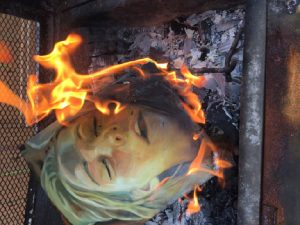 The second part of the exhibition, which features the burning canvasses, furthers the theme of women and their real life narratives of anguish and despair. In these works the women appear as if metaphorically slipping beyond our grasp as they become enveloped in flames. But this work also has another aspect to it, which speaks to the process of art and how art comes into being. Art, for the most part, rests in the finished product, and mainly art is seen as a predetermination of the artist. But this work has come into existence more by chance circumstances and by listening to the advice of others than predetermination. Woermke’s studio was full and she needed to empty it. So she chose to burn some portrait paintings she had done previously – as part of her Secret Lives series. These were images of women taken from popular media like CSI, or reality television, each chosen for their desperate and helpless expressions. As she was burning the paintings Woermke thought to document the process by taking a picture with her iphone of each burning canvas and posting them on social media. It was Pedros who suggested making the iphone images into posters and including them as part of her Paper Crown exhibition.

For a person who is both the executive director and curator of a public art gallery, Woermke is prepared to challenge the role she plays in determining community art. As an artist she is to be commended for not only leading the way for artists to take control of their art, but also for opening up the art-making process to chance and the ideas of others. Mainly, the form and content of Woermke’s exhibition stem from her strong desire to bring a hidden social tragedy into the public domain. And she feels this can be more effectively communicated outside of the realm of public galleries.