London artist Gerard Pas has been a pioneer of disability arts in Canada since the 1970s. He is among the first generation of international artists who expressed their identities as disabled people in order to challenge prevailing attitudes and stereotypes.

Broken Body includes close to 30 years of ‘self-reflective’ works motivated by the frustration of being culturally and socially marginalized because of his atrophied leg, which was the result of having polio as a child.

Works in the show include photographs, sculptures and paintings.

Featuring recent works by Dil Hildebrand and Patrick Thibert, the tongue-in-cheek title of this exhibition conjures up associations to mortality and re-birth, but more directly references the genre of abstraction. In the last 100 years, abstraction has been sought after, theorized, given life and meaning to, only to be re-interpreted and re-invented many times over. Both Hildebrand and Thibert are part of this complex and faceted trajectory, coming to abstraction from their own individual positions of experience and place. Seen together, the works of Hildebrand and Thibert reveal shared common links but also the diverse tangents that the genre of abstraction possesses.

Mathematical Artist ErikFlock (a.k.a. F A.M. E) began his artistic career in Evolutionary Art in 2014 with a self-devised mathematical formula and a computer. ErikFlock is a digital colourist and mathematical theorist. He is the inventor of Digital Press Ink (DPI) for Digital Machine Art (Digimacha). ErikFlock envisions an algorithm to predict a pattern of prime numbers in a square, defines this pattern as a digital algorithm and creates a process to produce evolutionary art of artistic and technical merit “of equivalent infinity and figurative plausibility.” His belief, simply stated, “Art Made Man.”

From the 1950s through the 1970s, cities throughout North America engaged in disruptive periods of massive “urban renewal” of older, poorer areas. These aged neighbourhoods were razed to make way for highways, housing projects, sports arenas, and acres of open, unoccupied space.

Ian MacEachern focused his camera lens on one such neighbourhood in Saint John which was not simply transformed over time, it was obliterated.

MacEachern’s images represent a rich trove of human stories about community, family ties, the disappearing architectural landscape, and the face of powerful change during the mid-twentieth century. They portray the day-to-day adversity, but also the episodes of sympathy and joy that surrounded inner city urban life not so long ago. These photographs show us a Saint John that was tired but full of energy; decaying but full of life. This is the lost city.

London Lens brings together the imagery of two London photographers from the 1960s. Artists who were also friends, Ian MacEachern and Don Vincent portrayed life in this city’s downtown, capturing glimpses of work and leisure, and recording the creative cultural upheaval in which the London Regionalists—artists, filmmakers, novelists, poets, musicians, and activists—flourished.

The Windsor, Ontario-based artist Dean Carson engages with the often-neglected backdrops to our lives, contemplating the space itself rather than the narratives unfolding within them. His drawings and paintings capture visual irregularities and abstractions hiding in plain sight.

Meryl McMaster’s potent, mysterious photographs explore the fluid domain of identity, and the possibilities for examining and revisioning the self and its representation. Placing her body centrally in front of the camera, McMaster transforms her appearance, whether by layering photographic images onto her body or through elaborate costumes and props she creates and inhabits as alter egos, solitary in the landscape.

Also check out the current or upcoming interesting exhibitions/shows/talks at: 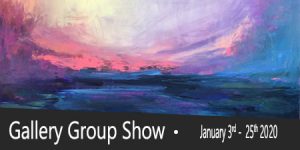 Andres Garzon is a London, Ontario based artist and illustrator. His handcrafted, colourful and impactful work explores themes of identity, personal growth, and advocacy. Through his practice, Andres consistently highlights the endless benefits of sharing our personal struggles as both creative people and human beings.

Good Talks is a monthly series of artist talks where emerging artists with connections to London discuss their careers. Funding support from the Ontario Arts Council.